Can you win the South Asian Champions League with only Afghan Nationals?

The basic FM19 Database can be found here – it’s one from FM Scout, and all I have made the following changes:

The hardest part of the challenge is that no Afghan clubs currently qualify for the Champions League – we have to make do with the Asian Confederation Cup for now.. As long as we win the league..

I have used the Create a Club function and proudly launch the Afghan Hounds – the type of name that is amusing the first time you hear it and then becomes boring, kind of like my blogs.. 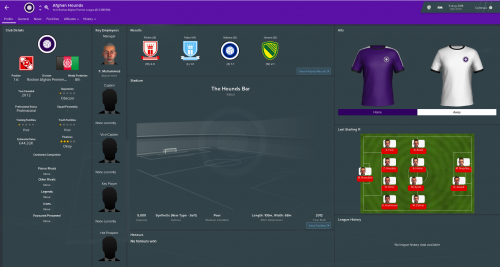 There might be quite a jump between objectives 2 and 3..

Oh and we have 0 players to start with…

I’ve got a choice here where I can list out a screenshot of EVERY PLAYER that I recruited before the season started or just offer a link to the SI Forum where it’s listed.. I’ll be kind folks..

Once my scouts had actually watched some players

The stage just before the campaign begins and we realised where the missing links were.. Or PANIC!!!!!

So that’s the recruitment organised, fixtures are out and the only thing that is left to do is now play some football – the expectation is finish 8th out of 8.. The only guarantee I can make is a top 10 finish… The positive is that pre-season has been really good, with lots of goals and wins.. The negative is that we are playing some really bad sides..

One thought on “Aim for the Stars, Hit Kabul”