After last seasons amazing league and cup double, alongside an amazing run in the Europa League getting us all the way to final where we lost to Liverpool hopes are high for the upcoming season. Can we start to dominate Austrian football? Can we produce another sensational European run? Here’s hoping!

A couple of big first teamers have left. GK Araujo made noises about wanting to leave to a bigger club, I found a replacement so gave him his wish. I mentioned in my previous post I would look to move LB Holzer on, his constant whinging about me not playing youth players and his poor performances made my mind up, he left for £5m. Moreno had been in and out of the first team and went out on many loans but failed to impress, £3m is a great deal.

I had mentioned before about Striker Fiedler and how his loan last season had persuaded me to give him a first team chance, well he had other ideas and asked for a move. £5m is an amazing deal.

So we had a few gaps to fill, a new GK was needed as was a back-up LB, I managed to fill both slots and a couple of extras.

With me planning to give Grussman a shot as my No.1 LB I went out for a back-up. Rysavy isn’t rated very highly but I personally feel he looks decent, a relatively cheap deal and has lots of time to improve.

Signed as my No. 2 GK for this season. A cracking deal and at only 18 has many years ahead of himself.

My replacement for Araujo and a massive step up. He looks amazing, had a great personality and is only 25. Hopefully he can become my No. 1 GK for many years to come/

I decided to bolster my defensive ranks at the last minute. Bardin was offered to me by his agent and after a big of scouting realised he could be a massive player for me. Is already 28 but has plenty of potential and will make our already water tight defence even better.

Our Champions League journey for this season started in the Play off round where we faced Croatian side Dinamo, we eased past them 1-0 in the home leg and 5-0 in the away leg to qualify for the Group Stage.

Where we were handed what on paper looked like a much easier group than others we could’ve had. Frankfurt, Krasnodar and Arsenal was no easy task but we avoided all the massive club and I was hopeful we could push for qualification to the knockouts.

It started off amazingly, a brilliant 2-1 away win over Frankfurt and an amazing 4-3 home win over Arsenal but us in poll position, this is where it went slightly downhill, 2 poor defeats over Krasnodar set us back, we pulled ourselves back into contention with a stunning 4-0 win over Frankfurt meaning with 1 games left us, Krasnodar and Arsenal all sat on 9 points. With 3 teams all on the same points the head to head was scrapped and we sat 3rd on GD, we knew only a win would do away to Arsenal to seal qualification or we would drop into the Europa League.

At half time it looked unbelievable, we sat 2-0 up and coasting, then in true FM style my team decided to start playing like muppets, 3 goals, all in the final 20 minutes meant we had bottled it, a 3-2 defeat. A gutting way to drop out of the Champions League but we had once again ended 3rd and were into the Europa.

After losing in the final last year I was determined to have another good run in this competition. One thing I hadn’t achieved in this save is to win a European Trophy, we had a Champions League final loss with Spartak Moscow and last season Europa League final loss.

Well we had another sensational run once again. In the Last 32 was Greek side Olympiakos and a 5-0 away win set us up, we rotated the team in the home leg, losing the game 4-3 but we had eased through to the Last 16.

Where we faced Hamburg, and once again an away win in the 1st leg gave us a great start, as the score was only 2-1 I played a strong team in the 2nd leg and it paid off as we won the game 3-0 to win 5-1 on aggregate.

Into the Quarters where we faced Swiss side Young Boys, on paper they looked the stronger team, the home leg was up first and we played amazing to smash them 3-0, the away leg was a lot tighter but a 1-1 draw put us into the Semis!

Where we had the draw we didn’t want. Old side Spartak Moscow stood in our way and they were by far the better side. What happened next was insane, the away leg first and we battered them! It ended 3-0 but it could’ve been a lot more. The home leg was a lot tighter and at half time they sat 2-0 up and full of confidence, I gave the boys a kick in the arse and it worked as we scored twice to draw the game 2-2 and go through 5-2 on aggregate and for the second season in a row we were into the final.

Where we played English side Southampton, it looked a winnable tie and to be honest we should’ve won. Well we didn’t, a goal on the half hour mark but Southampton 1-0 up, their defence stood up to everything we threw at them and as the final whistle blew we had lost, the second Europa League final in a row we had ended as runners-up. Absolutely gutting!

The Austrian Cup started really well. We breezed through the first 3 rounds, scoring 10 goals and conceding none. It was looking oh so good.

With games mounting up due to our European participation and League challenge injuries and fitness were a massive issue and when we played Mattersberg in the Quarter finals I had 5 first team players out.

The game itself was terrible, neither team were playing well and it was a goal fitting of this kind of match that settled it. Unfortunately for us a Strobl own goal, knocking the ball back our GK in the 85th minute was the deciding goal. We absolutely went for it in the last 5 minutes, even throwing our GK up for corners, in the 93rd minute he very nearly scored, but his header drifted wide of the post, the whistle blew and we were out.

So Europa League final loss and a disaster in the Austrian Cup, surely we couldn’t mess up the League too!

Well it started incredibly, we were unbeaten for the first 17 games, losing our only game of the regular season 3-0 to Austria Wien. We were playing amazing, smashing most team, at the end of regular season we had 55 points out of a possible 66, sitting 14 points clear of the chasing pack.

Our 14 point lead was then cut in half to 7 as we entered the Championship group.

We had a much tougher championship group, our fixture pile up with the Europa League run and lots of injuries were hurting us but we kept up our lead at the top and with 3 games to we sealed the league title with a stunning 3-0 win over Red Bull Salzburg.

It was by far the best League campaign we have had, we didn’t get as many points as last season but overall our performances were a lot better and a lot more consistant. We only lost 1 match all season but our points tally was hurt by 9 draws.

We won the league by a massive 8 points. With Austria Wien in 2nd and Red Bull a lowly 4th!

So who has stood out this season?

I have to talk about Striker Willems, I spent a massive amount on him in the hope he could become the 30 goal a season man I expected him to be. Boy did he show it! 32 goals in 40 starts and 21 in the league ending as the leagues top scorer. He has been amazing and hopefully he can continue this form for the next few years. 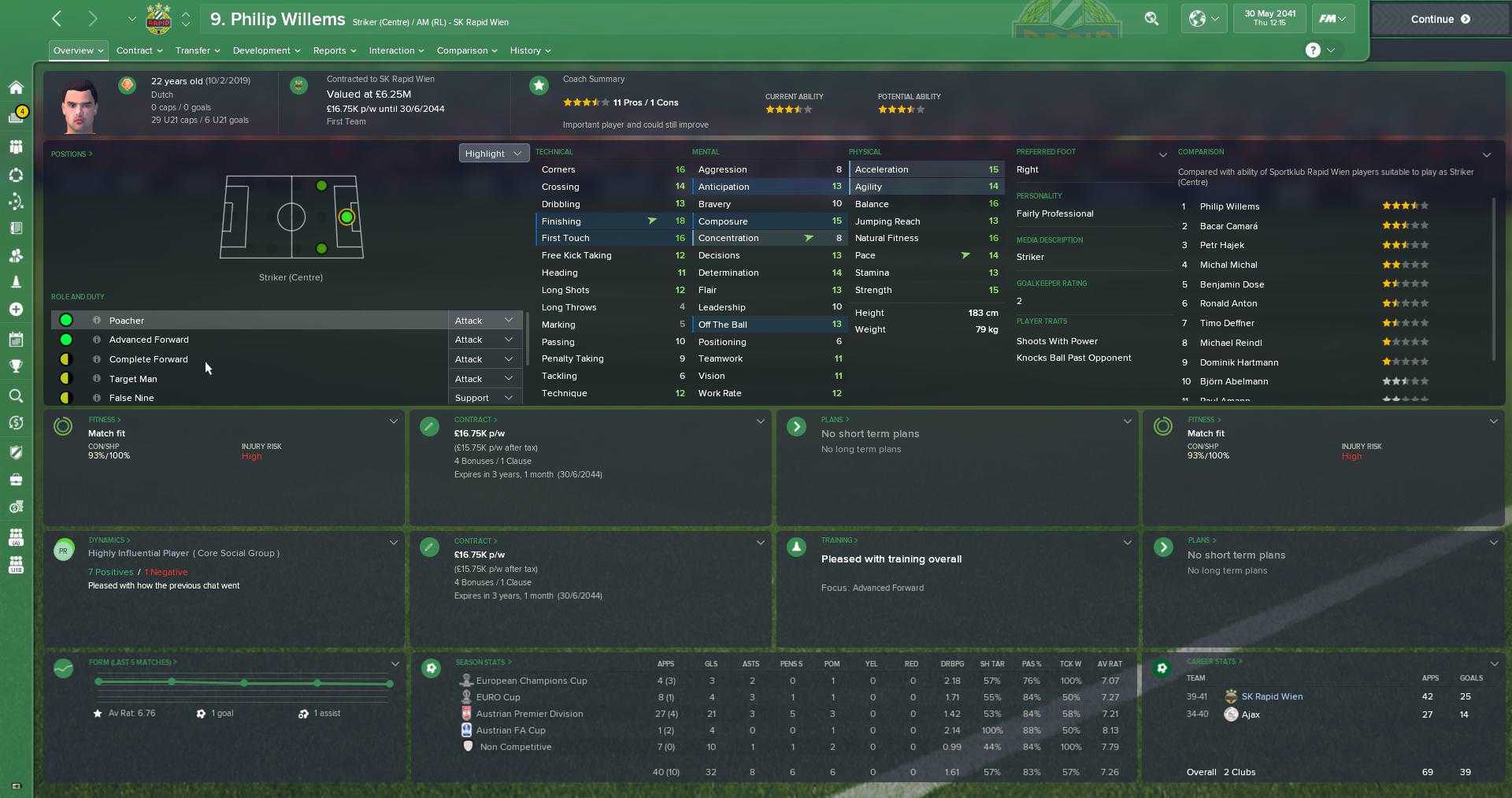 Central Defender Kovacevic has been truly incredible the last few seasons and this season was no different, He played 29 of the 32 league games, playing 49 games in total, averaging 7.33. He is the one man I am concerned about losing, I turned down bids up to 15m for him during last summer and see this one being no different! 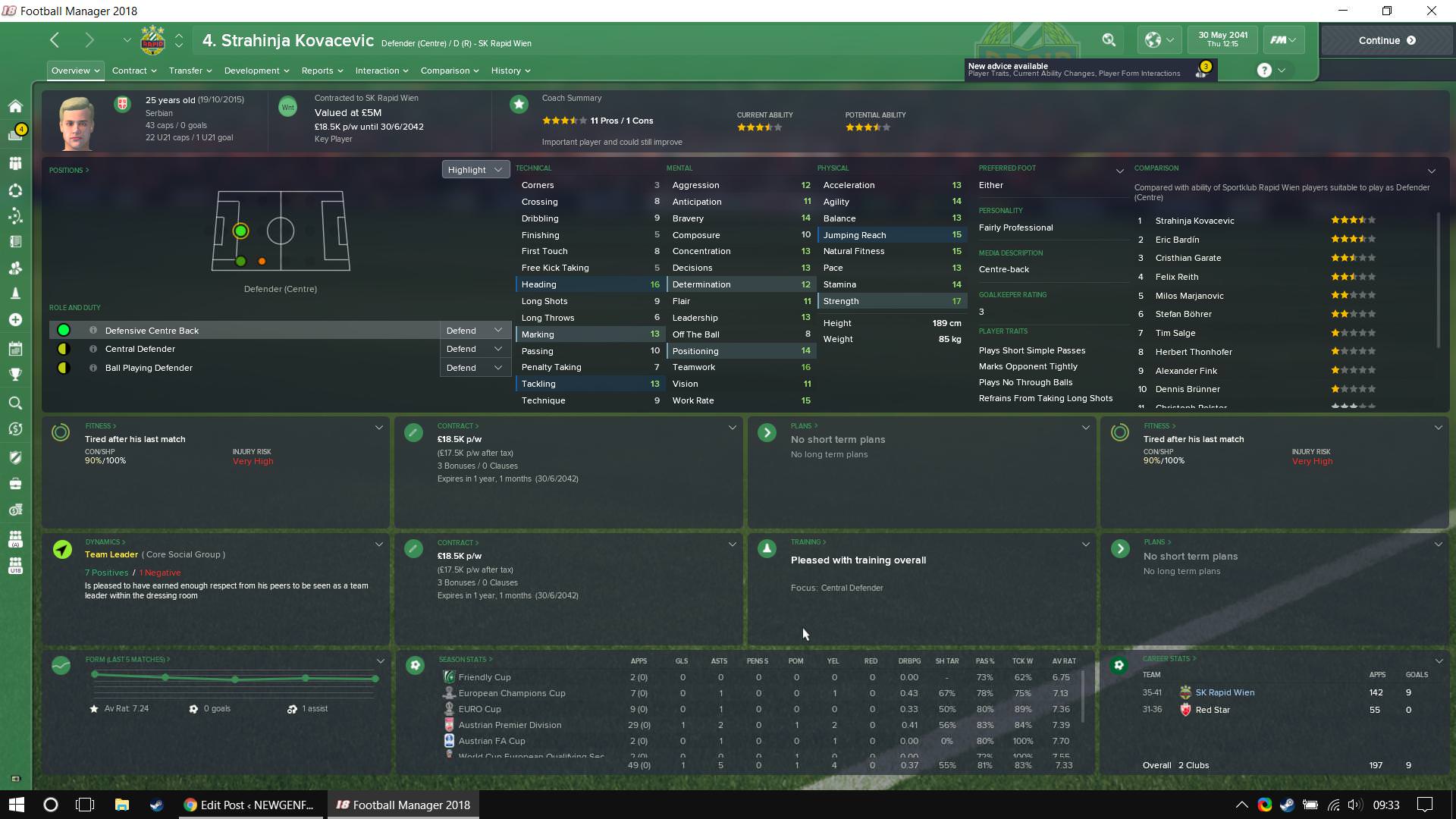 Once again my Attacking Midfield 3 had sensational seasons. I won’t speak too much about them, just give you a few stats instead.

These 3 are so important to my team and I really hope they stick around!

So let’s looks at the 2 players I earmarked to break into the first team this season.

Central Defender Gruber really didn’t do well. He just hasn’t improved how I hoped and with my defence being settled and solid I decided to send him out on loan to fellow Premier League side SV Reid, in his 13 games for them he averaged 6.77 and his performances really weren’t up to scratch. I’m really not sure he is cut out for my team but I may give him another season out on loan to see how he gets on. 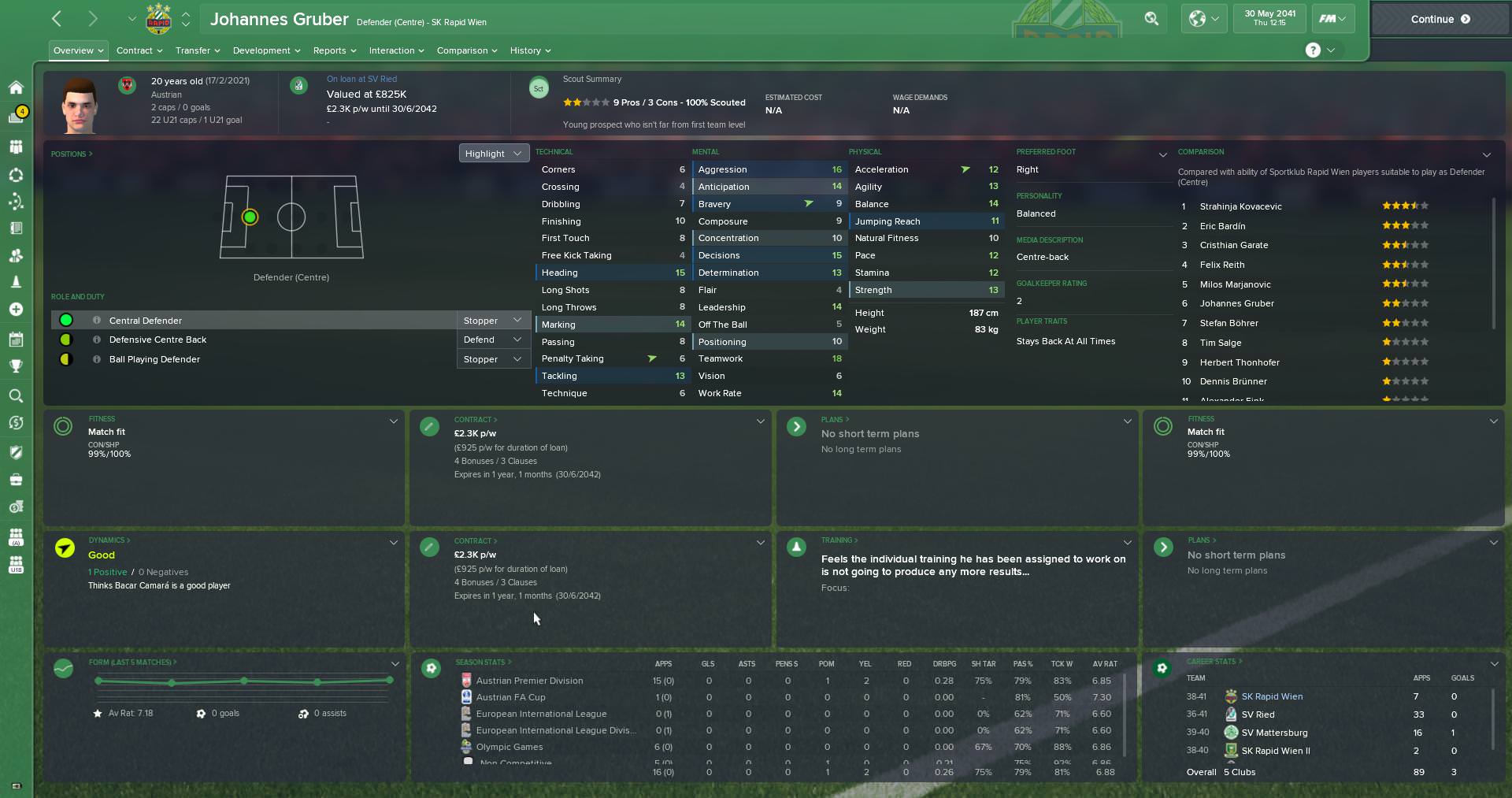 Left Back Grussman has a brilliant season for us, he played 24 of the 32 league games and played 38 games in total averaging 7.30, scoring 1 and getting 3 assists. He is a fantastic player on the pitch but unfortunately his attitude off it leaves much to be desired. He spent the first half of the season wanting a move to Wolfsberger, trying to cause a squad mutiny as well. Then when we won the league he decided he wanted to stay! Personally he is a great player and hopefully now he has a settled spot in the team he will calm down and get his head in the game! 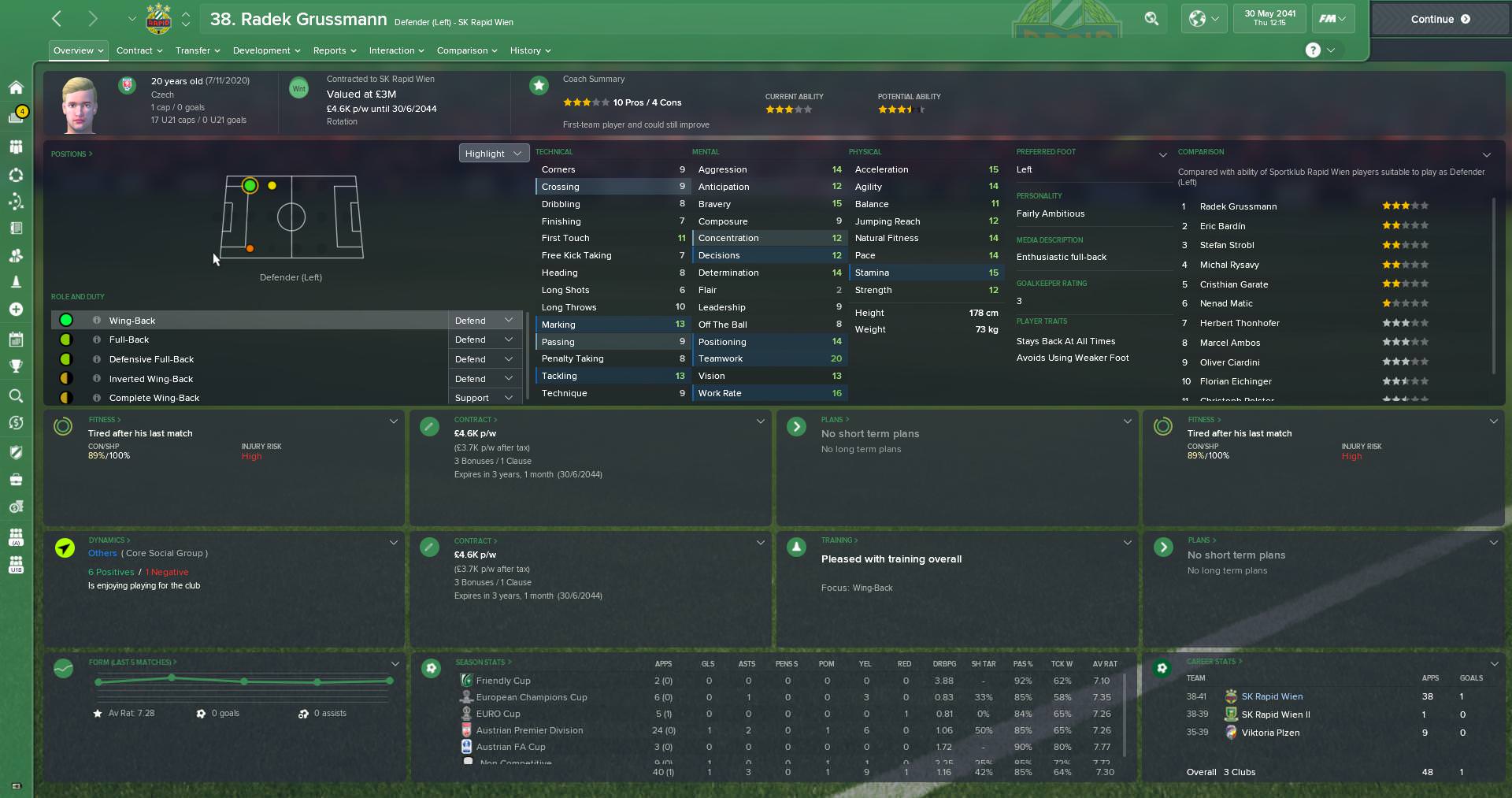 So who have I pinpointed this season to come into the first team?

For this season I’m only looking at 1 player and that Central Midfield Slobodan Kostic, he played quite a few games this season and always looked solid and hopefully next season I can play him a lot more and see how he improves. 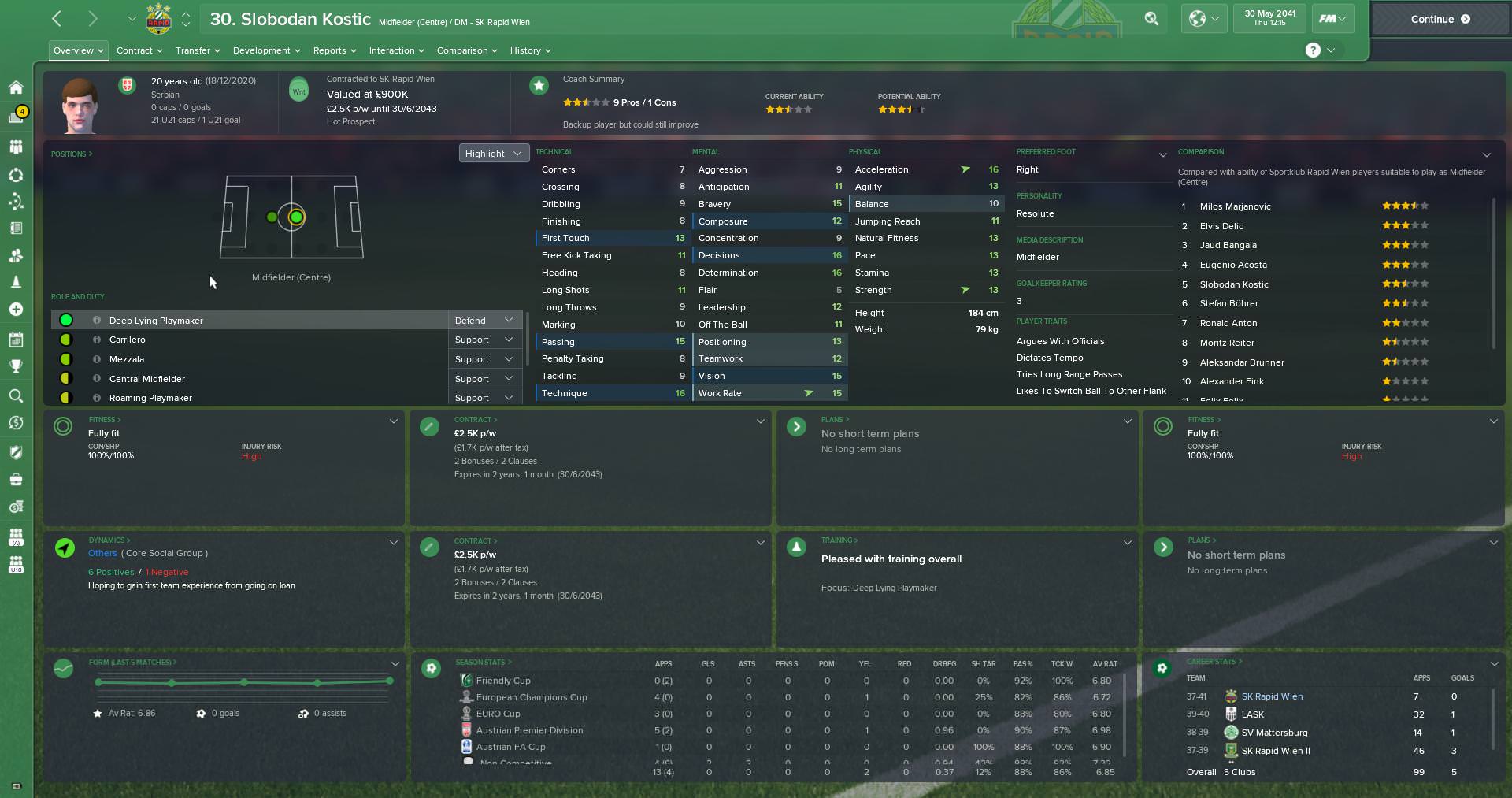 In the next season review I will look back at all the players I have earmarked over the past 3 or 4 season reviews and how they have got on.

So our 4th League title and our 7th trophy in Austria in total, and this pushes me up to 6th in the Austrian Hall of Fame, we still have a long way to go, I think I need another 6 trophies to top it. 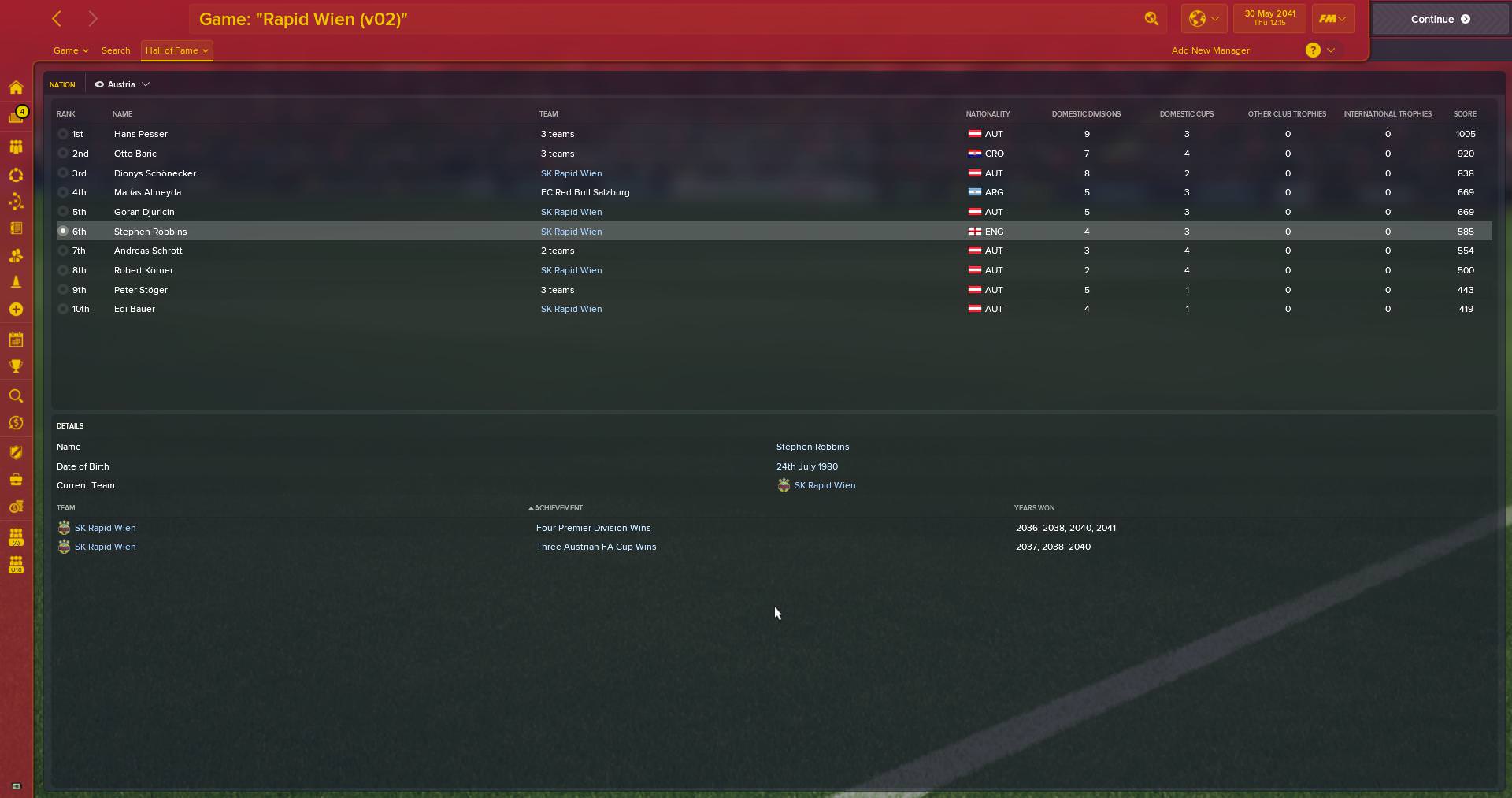 So in the league a brilliant season but it was disappointing to go out in the cup so early and to lose our 2nd successive Europa League final was gutting.

So for next season we just need to keep continuing on the same road, keep winning trophies and hope we have another good shot at Europe.

Squad wise I can’t see many changes unless we lose players. LB Grussman has made noises about leaving and there are lots of players wanted by bigger clubs. Like I say however there will be no major signings unless a player pops up who is too good to say no to or we lose a big name player

Anyway, that’s all from me now, I hope you enjoyed the update. Speak to you all soon.